These two Little Gulls (Hydrocoleus minutus) were at Chew Valley Lake this afternoon. Usually, when Little Gulls turn up at Chew, they feed over the centre of the lake, way beyond camera range, but for some reason, these two birds chose to frequent Herriott’s Pool, the small body of water separated from the main lake by the A368.

These two are a non-breeding-plumaged adult (left) and a juvenile (right). Little Gull is the world’s smallest gull, much smaller than a Black-headed Gull (Chroicocephalus ridibundus). Adults have deep dark grey underwings, and the pale grey upperwings lack the finger of white along the front edge that Black-headed Gull shows. In breeding plumage they have black hoods and pink-washed underparts. Juveniles have a contrasting pattern of black, grey and white, lacking the gingery-brown tones of juvenile Black-headed Gulls. The black stretches from wing-tip to wing-tip across the back (the bird in the picture above has its wings fully outstretched; when the wings are in normal beating mode, the black forms a ‘W’ shape). Juveniles moult into first-winter plumage later in the autumn, replacing the black on the upperparts with pale grey, but the black on the wings remains, so the W is a good feature throughout the winter (note that juvenile and first-winter Kittiwakes have a similar pattern, but as long as you have a Black-headed Gull nearby for a size comparison you shouldn’t get the two confused).

Little Gulls do not regularly breed in Britain. Their main breeding colonies lie to the east of us, in marshes from eastern Europe and Scandinavia into Russia. They mainly occur in Britain on migration, in April and May, and then again from August to October. Flocks at Chew Valley Lake are usually of single-figures, or occasionally into double-figures. These numbers are typical for large wetland sites in Britain. There are two areas in Britain which regularly attract much large numbers, however: the Mersey coast, and the east Yorkshire coast. The former often attracts hundreds, and the latter has been known to host thousands. Small numbers of (usually first-summer) birds oversummer in Britain, mainly on the east coast, and occasionally make nesting attempts, although so far these have all been unsuccessful. Interestingly, breeding Little Gulls have successfully colonised the east coast of North America in the last hundred years, so the establishment of a British colony may be a possibility one day.

The fern in the photo below is Lanceolate Spleenwort (Asplenium obovatum), a scarce species which is mainly found in coastal locations in southwest England and Wales, but which has a small population in the woods on the Oldbury Court estate (a location sometimes also referred to as “Glen Frome”), where it was first found in 1835.

There are several features which enable Lanceolate Spleenwort to be told apart from its more common relative Black Spleenwort (Asplenium adiantum-nigrum). To make this easier to follow, I need to introduce a few bits of fern terminology. The stipe of a fern is the main stalk of a fern frond. In most fern species, the frond is divided up: the main segments are called pinnae, and the lobes on each pinna are called pinnules.

Lanceolate Spleenwort grows in sheltered fissures and crevices on acidic rocks, although in the warmer far southwest, it is also found on hedgebanks in lanes. The largest British populations are on sea cliffs in Devon, Cornwall and northwest Wales. The Oldbury Court site is the easternmost extant site in Britain for this species, and is isolated from other populations of Lanceolate Spleenwort by many tens of miles. In southwest England it is not found again until Exmoor, and in south Wales, not until the Gower peninsula, although there are old records from Beachley near Chepstow. Its northernmost locations, in Cumbria and southwest Scotland, are also very isolated. Globally its range extends south through France, Spain and Portugal to the Canary Islands, Madeira and the Azores, a distribution-type that is shared by a number of other fern species. Black Spleenwort is nowhere near as fussy, liking all rock types (loads of it grows on the limestone in the Avon Gorge, for example); I have even found it on walls in the city centre, near the Bristol Royal Infirmary and Old Market.

Here is the location of the plant I photographed (and a photo of the outcrop on which it was growing). If you want to visit it yourself, take care as it is on a steep muddy slope, high above the river. The best approach is to head up the zigzag footpath from the weir, and then take a right turn when you reach some railings. However, there are lots of similar-looking outcrops in the valley, from Eastville Park northeast to Winterbourne and it wouldn’t surprise me if some of these had their own mini-populations of Lanceolate Spleenwort too. 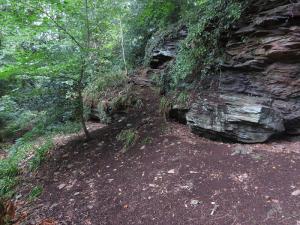 I bumped into three Whinchats (Saxicola rubetra) this afternoon at Stockwood Open Space, in the thistly rough grassland between the sports pitch and the main path. One of them was co-operative enough to enable me to get a photo.

At this time of year, all ages and both sexes of Whinchats look pretty much the same, with a buffy stripe above the eye (the supercilium), dark droplet-shaped markings on the upperparts, and pale orangey-buff underparts. Spring males, however, are boldly marked, with a distinctive head-pattern (a white supercilium and dark cheeks) and the orange on the throat and breast is more intense, like this bird.

Whinchats don’t breed around Bristol: these birds are on migration, south to their wintering areas. After they leave Britain, these birds are likely to move south through France to Spain or Portugal, where they will feed up, ready for a flight across the Sahara to their wintering zone in the savannah from Senegal eastwards; returning birds in the spring are usually seen from the second half of April.

Networks this blog belongs to